Ultrasound in Carpal tunnel syndrome
Ultrasound (US) is a useful tool in cases of possible carpal tunnel syndrome (CTS). Whilst the median nerve is compressed within the carpal tunnel, it becomes swollen just before it enters the tunnel. The swollen nerve is oedematous and appears more hypoechoic than normal on US (Fig. 1). Several metanalyses (Ref 1) have suggested that a cross sectional area  (CSA) of > 10 mm2 at this point is supportive of a clinical diagnosis of CTS. This figure is approximate since the size of the median nerve may be influenced by BMI, gender and other disease states.

As the swollen nerve enters the carpal tunnel (CT) it is compressed and this can lead to the inverted notch sign when the nerve is viewed in a longitudinal plane (Fig. 2). The notch refers to the abrupt reduction in the vertical dimension of the nerve as it enters the tunnel.

Another anatomical variant that may predispose to median nerve compression is the presence of muscle fibres of one or more of the long finger flexors extending into the CT. The hypoechoic fibres of the muscle surround the tendon and may be mistaken for a collection of fluid in the tendon sheath. The two may be distinguished by asking the patient to clench his or her fist. Accessory muscle fibres will readily disappear as the muscle retracts during this manoeuvre but fluid within the tendon sheath will remain. Doppler scanning will also help to distinguish between the two. The Doppler signal will be negative in the muscle fibres but positive in tenosynovitis (Fig 4).

US may also reveal other space occupying lesions in or near the CT that may lead to median nerve compression (eg. ganglia, lipomata, schwannomas etc).

Perhaps one of the most useful aspects of US in CTS is ultrasound guided injection (USGI). ‘Blind’ injection often leads to painful contact of the injecting needle with the swollen median nerve. Direct visualisation of the nerve during USGI should eliminate this complication altogether. 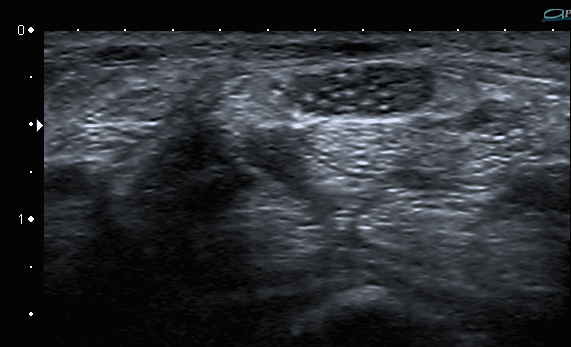 ← Two cases of De Quervain’s Tenosynovitis. TSV or not TSV – that is the question? Schwannoma of the median nerve →