Anterior ankle pain, what is causing it?

This patient was referred with a chronic history of five years of pain on the dorsum of her foot and ankle. She had seen multiple health professionals, with courses of both Physiotherapy and Podiatry proving unhelpful. She had also undergone extensive investigations including most recently an ankle x-ray, the images of which can been seen below. The report of which was ‘No fracture seen.Well defined calcaneal spur.Tibio talar joint space preserved.1st metatarsal screws.’

This patient had also undergone an MRI (not available a the time of the consultation), the report was as follows and the image can be seen below.

‘There is a small 1cm bleb in the skin and subcutaneous tissues anteriorly over the ankle joint. This shows high signal on STIR and low signal on T1. This communicates with marked thickening of the tendon sheath of extensor hallucis longus. Postgadolinium enhancement of the tendon sheath and skin lesion is demonstrated.’

The patient reported an area of discomfort across the anterior ankle,that tended to become more sore with activity. She could not recall any trauma or alterations in her activity levels that may have contributed to the symptoms. Her past medical history was unremarkable, and she lived a healthy lifestyle. On examination, there was noting of note. No effusion, no redness, no visible deformity. Range of movement was reasonable with some slight discomfort at the end of range of dorsiflexion. Resisted tests were normal with full power and no pain. Functional testing of lunge, squat and hopping were all unremarkable. There were no significant biomechanical issues identified that were contributing to the source of symptoms across the anterior aspect of the joint. My initial clinical suspicion was one of a sense of uncertainty as to what could be causing this patients pain. This was particularly the case as it was not easy to reproduce any symptoms during the examination, she had received extensive input previously and also had an MRI and X-ray, which had not offered any further clarity on what could be causing her symptoms.

On ultrasound, a bright hyperechoic structure was identified over the distal aspect of the tibia, measuring 2.5cm in the longitudinal view. A series of images can be seen in the gallery below, and its location in relation to the prominent tibialis anterior tendon, can be seen in the image above on my foot!

It is always important to correlate the ultrasound images with the patients presentation. In this instance not only did access to ultrasound reveal this unusual finding but it also enabled direct palpation under ultrasound guidance to reproduce the patients symptoms. You can see from the images that there is no acoustic shadowing deep to the structure, and it was not possible to change this with altering the angulation of the probe. This suggested the object was not hard like metal or bone, and this may have been why it did not show on earlier imaging. A video of the object can be seen below.

There was nothing else to suggest that this lesion was not the cause of the patients symptoms and she was promptly referred to see a Podiatric surgeon for consideration of surgical removal. They were in agreement with my judgement and the surgery was carried out under ultrasound guidance to target the structure precisely with as small an incision as possible. A selection of the images can be seen below.

Interestingly, from discussing the case with the surgeon post-operatively it was more difficult than anticipated to remove the foreign body. When finally removed, it was apparently very evident that it was encapsulated within a fibrous capsule, perhaps the bodies mechanism for sealing off any foreign object and risk of infection. You can see this clearly in the ultrasound image below, where there is a large dark area, or hypoechoic area to the left hand end of the object.

The object that was removed appeared to be  a large splinter of wood, which would be consistent with the lack of acoustic shadowing. An image of the object can be seen below.

The patient is making a good recovery now, and is grateful that she was seen in a clinic with access to diagnostic ultrasound. Despite this being a very unusual case, it does demonstrate that ultrasound provides extra information. As we know ultrasound does not always change a patients management or alter a diagnosis that can be made clinically. In this case it did help with identifying this foreign body on MSK Ultrasound!.

Some articles on foreign bodies and their sonographic appearance. 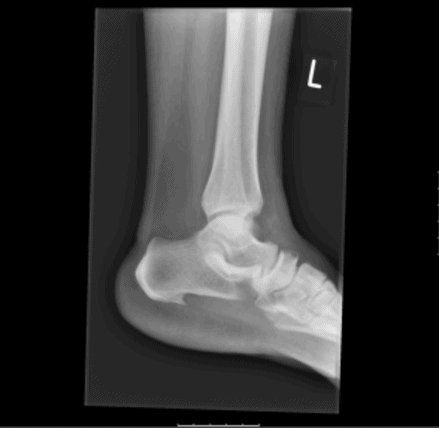