Ultrasound in Rheumatology: Osteoarthritis and ultrasound

Osteoarthritis (OA) is the commonest type of arthritis and causes the joints to feel stiff and painful and become deformed. Occasionally, joints can become swollen. All joints can be affected but more common in the small joints of the hands, thumbs, shoulders, neck, lower back, hips and knees.

It is usually due to gradual wearing of the joint with time and an inability of the body to heal itself. It usually starts from late 40s onwards. Women tend to be more severely affected than men. It results in a reduced or loss of function of the affected joint.

Osteoarthritis is a degenerative joint disease that may cause loss of the protective layer of cartilage at the ends of the bones and damage to joint tissues. Ligaments can become thickened and menisci worn away. Osteophytes are bony growths that form on the end of joints. Changes in the synovium and subchondral bone occur. All these events contribute to pain, stiffness and a loss of function.

There are many risk factors of osteoarthritis and a combination of these leads to the development of the condition.A high BMI can also make symptoms of osteoarthritis worse. Joint injury due to a major surgery or hard, repetitive activity or physically demanding jobs can increase your risk. Some forms of arthritis such as nodal OA tend to run in families. Secondary OA can be due to other joint diseases such as rheumatoid arthritis or gout.

Patients typically present with symptoms of joint pain, stiffness (less than 30 minutes), and a restriction of movements of the affected joints. Occasionally, large joints including the knees can be swollen. The commonest joints that tend to be affected are the MCPJs, PIPJs, DIPJs as well as the first CMC, first MTPJ, hips, knees and vertebral spines. Other joints affected include the shoulders and ankle joints. An important differentiation from rheumatoid arthritis is the involvement of the DIPJs.

Bony enlargement of the first MTP joint is a common finding. Hallux valgus deformity, hallux rigidus, and cross-over toes are common deformities. Bony enlargement at the first MTP joint and hallux valgus frequently lead to the development of a bunion at the first MTPJ which can become inflamed. Bony swelling reflects remodelling of the bone and cartilage on either side of the joint and marginal osteophytes and may be evident in small (e.g., finger interphalangeal, first metatarsophalangeal [MTP]) and large (e.g., knee) joints. There are various disease patterns of OA presentation that are important to be aware of:

Erosive/Inflammatory OA is a particularly aggressive subset of hand OA. It presents with a subacute or insidious onset of pain, stiffness, soft-tissue swelling affecting multiple interphalangeal joints. Erosive OA targets just interphalangeal joints (the DIP joints more frequently than PIP joints) and usually spares the thumb bases and MCP joints. It can look similar to other form of inflammatory arthritis, so these have to be excluded.

Blood tests may indicate elevated inflammatory markers especially in the context of erosive/inflammatory OA. However, if these are elevated other causes of inflammatory arthritis must be considered. X rays are important in the assessment of OA. Characteristic features that are seen include osteophytes, joint space narrowing, subchondral sclerosis, and cysts. Central erosions are seen in erosive OA.

Ultrasound has a very important role in the work up of patients with OA. It is useful in detecting osteophytes which tends to be a hallmark of the disease as well as assessing the joint space and integrity of cartilage. Meniscal extrusion (at the knees) is a common finding. Joint effusions are readily seen as well as detecting synovial hypertrophy/synovitis especially in cases of inflammatory OA. It is useful in the differentiation of inflammatory arthritis from OA.

See our other Osteoarthritis related resources below ← Tenosynovitis on ultrasound Rheumatoid and Ultrasound → 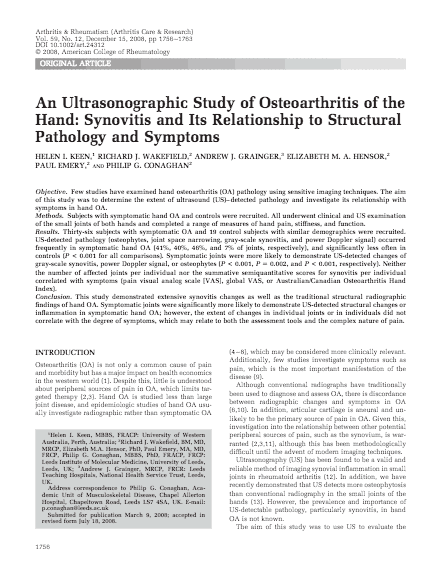 Moller et al (2008) "Ultrasound in the study and monitoring of osteoarthritis" Osteoarthritis and Cartilage ,16, S4eS7